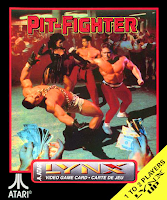 Buzz...Ty...Kato...remember them? If you played any of the incarnations of ‘Pit Fighter’, with whichever console, you’ll know that this is a game that features no-holds barred fighting. And there are few rules.

Alright, no rules. Plus weapons. And steroids. I wish I was joking about that last one, but unfortunately it’s true (okay it's called a “Power Pill” but I haven't seen jellybeans produce the kind of effect these crazy pills give). So, what can I say? Welcome to ‘Pitfighter’, punk! Picture the UFC without referees and you get this game. By the way, mind that chair behind you in the mud pit; better grab it before they do!

Time to press the pause button: I want to take you back, if I may. It was the era of ‘Street Fighter 2’, ‘Street Fighter 2 Turbo’, ‘The Art of Fighting’ and ‘Fatal Fury’. Remember those at the arcades? And then on the home consoles? It was the era of the one-on-one fighter. Of course, when ‘Mortal Kombat’ came out, you got the feeling that you’d seen a digitised fighting game before (if you are ancient like me). Yep, that other game was ‘Pitfighter’, a considerably older title featuring real-life animated human fighters, pitted against each other in a grimy fighting cavern.

When ‘Pitfighter’ came out in the Lynx, then, it was kind of a shock. Not because the Lynx hadn’t done older arcade game before (it has) but because handheld gaming systems had not really explored “one-on-one” fighters too much until now. That was a TV console thing. It just didn’t seem possible at that time to do it well, on such a small screen. So, considering the Lynx had no real one-on-one fighting games released for it prior to this one, how does this title fare?

Let’s start with the feel of the game once you hit that ‘on’ button. It’s immediately impressive how, once again, they’ve managed to fit another arcade classic into the Lynx. I mean, it’s incredible really. And amazingly, what faces you is the realistic version of the game, rather than the more cartoony-looking version that has appeared on home consoles before. There aren’t a huge number of options: you choose your character (from three) and then get ready to rumble!

Now you are faced with the in-game visuals. And here is where it’s a bit of a mixed bag. The sprites are certainly realistic, but there are some strange issues with movement. Characters and enemies, whilst looking like real people, often move awkwardly, and animation can be choppy or unusual. Plus, the backgrounds are REALLY dirty and muddy. Now, that’s not a bad thing given the fact that it’s a fight in a pit, but the visuals can become quite murky, particularly if you walk your character too close to the crowd watching the fight. By the way, the crowd does like to step out and fight you as well, but amusingly, they can be attacked also! Did I mention the lack of rules earlier? Yes, it gets pretty obvious when you get further into the game.

The Lynx scaling is certainly on show again, and as a one-on-on fighter, ‘Pit Fighter’ is different in the sense that you can walk up and down the screen. You can even fight twenty feet from the camera if you like. This tactic is not just a gimmick; sometimes you can pick up weapons or objects from above or below the general fighting line. And if you happen to find the “power pill”, you’ll be a fighting powerhouse for a short time and probably win quite easily. Just don't let the opponent eat it. You'll be SORRY! If they do, RUN! Objects around the pit are easy to find, and there are some nice visual touches. But again, it’s overall a little up and down visually. Impressive sometimes, but a little flawed.

Sound wise, the music is pretty weird to be honest, and not too engaging. It’s quite repetitive. Then again, you won’t be focusing too much on it while you avoid being beaten into a pulp. The fighting sound effects, on the other hand, are fairly well done, and are largely realistic. When someone heaves a heavy object at your schnozz, you’ll know about it fairly quickly! There’s no digitised speech though, which is a bit disappointing given the realism of the visuals. You wonder why it was not added, but then the size of the game itself may well have prevented additional audio.

What can we say about controlling the fighters? Well, the controls are pretty straightforward, and they are responsive overall. One of the best things about the game is the character variety. The three fighters are pretty different to each other. Buzz is better if you want a powerhouse, and he uses plenty of piledrivers and wrestling moves. Ty is the speedy kickboxer with good range and quick movements. Kato is sort of the middle option; he’s probably one of the trickier fighters to win with overall. But he’s one of the most fun to play with. Trying to make your way through the game with only him can be really hard.

By the way, rightly or wrongly, there's even some humour in this game. For a laugh, let the huge shirtless guy in white shorts and chains eat the power pill. Then punch him in the chest a few times until he does his crouching headbutt move. The epic power of this move with the effects of the power pill are hilarious; happy flying!

Speaking of special moves, huge positive alert: what ‘Pit Fighter’ has in spades is a variety of attacks. The A and B buttons are responsible for punches and kicks, whilst the Option 1 button does a special move. And every time your special move connects, your character poses like a show-off! Pretty amusing the first time it happens, but hilarious if he gets socked midway through showboating. The Option 2 button does an evasion move, so you can quickly roll or jump your way out of trouble. Very useful. You can also jump (forward or straight up) and pick up one of the many weapons; knives, sticks, etc. and you can even pin an opponent while he’s down! There’s no sportsmanship here!

In terms of gameplay, you get a lot of the original opponents. Southside Jim is here and he is still a giant. Many of the other weirdos are also around. How some of them are allowed to stash hundreds of knives on their person, I'll never know. And man, some of the characters are really arrogant when they knock you over; heckling, gesturing to the crowd, it's pretty funny. Interestingly, there are also challenge rounds where you fight a clone of yourself (and I’m SURE they use special moves that I haven’t learned yet or can’t access - frustrating). Ultimately, you progress by fighting your way up until you meet the final boss. It’s nice to have such variation in the freakazoids you must get through along the way, and it's good that the final boss poses a fairly serious challenge. He's got some range!

‘Pit Fighter’ has a number of issues when it comes to overall challenge, however. For one thing, it is entirely possible to beat a lot of the opponents by just pinning them. Which takes enjoyment out of the game, obviously. Thankfully, not all of them fall for this trick, but you can significantly decrease the difficulty by doing this. Another thing is that enemies can sometimes score some pretty cheap hits. You have to learn the opponent moves pretty well before you are able to dominate them significantly. On the plus side, the game will definitely take a while to get through, with loads of opponents to scrap with - and the excellent replay factor of having the choice of three fighters to try and complete the game with.

In the end, the test is always whether the game is enjoyable overall. For me, ‘Pitfighter’ is a generally okay experience, but that doesn’t mean it’s a super high quality game. The messy-ish graphics, just passable sound and occasionally flaky animation do affect enjoyment overall (plus the clear strength of Buzz over the other fighters). I have seen others review this game very lowly, but I don’t necessarily agree; it’s playable, it’s a one-on-one fighter, it’s a good arcade translation...it’s just not the answer to ‘Street Fighter 2’ that some people were waiting for on a handheld system. But then, it never tries to be that; it’s only trying to be ‘Pit Fighter’, and that it does fairly capably.

So if you like your fighters, you might get a some enjoyment out of this title, despite some of the shortfalls. There’s plenty here to keep the rumble interesting, and it’s certainly not a breeze to finish. But with every single factor taken into account here, for me the game is a solid 6/10. I like to give it a go every now and then. It’s not a poor game, but it’s certainly not as good as it could have been. 'Pit Fighter' just might tide you over until someone makes a new homebrew one-on-one fighter. I wait for that with baited breath!