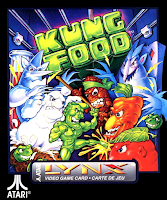 Never in my wildest dreams did I think I'd play a game where you fight carrots... as a green half-man, half-vegetable. In the fridge. As a result of ingesting a dangerous laboratory chemical. But maybe I'm old fashioned and all of this is perfectly normal. Perhaps there's nothing remotely weird about any of this. In any case, welcome to 'Kung Food', peeps.

Yes, 'Kung Food'... a scrolling beat 'em up where veggie pulp goes flying, the ice in the fridge ice-tray has gone rogue, and where the deadliest foes you face may end up being a group of ankle-biting, grinning peas. No, really... that was the last foe that stopped me cold last time, and those psycho little suckers nearly bit my green legs off!

Where to start when analysing ‘Kung Food’? Graphics. This is a strange looking game. Weird. You'll hear me use that word a lot, by the way. The opening intro graphics are nice though, with terrific animation and colour, and they explain just how this crazy vegetable situation came to be. The explained origin story of the mutated food is amusing, to say the least; but it’s really not important to understanding what this game is about, which is basically a food fight (geddit?).

In terms of in-game visual setting, you start off in your kitchen, and that's where you'll be controlling what I call an "ugly green veggie guy". You’ll walk to the right (a la ‘Double Dragon’ and ‘Ninja Gaiden’) to beat up the local produce, but you’ll also occasionally be moving in a vertical direction (up and down) as well. This is welcome, and does add a bit more variety than the standard beat ‘em up fair; which is always a good thing. The visual style of your character, and the various veggie foes, is clean and cartoony; the drawing is admittedly well executed.

As for the backgrounds, they are very creative (if jarring); you see, all the objects in your fridge are king-size, which gives your veggie character (and the veggie foes) a fun - if odd - sense of scale. Sometimes there are hidden objects behind them. Which you’ll need, as soon you’ll be faced with fighting food as soon as you take your early steps. So get ready to take on those rolling tomatoes!

Good beat ‘em ups have thumping music and sound. Does ‘Kung Food’ have any? Yes it does, but it’s nothing to write to the fruit and veg shop about. The music is simple but catchy, and the sounds are effective, but nothing really stands out. Comical speech a la ‘Toki’ would have really helped this game, to lift the experience out of the mediocre. Sadly, it’s lacking here. Which is a bit disappointing, but hey, at least this game HAS an audio track (many Lynx games don’t).

The controls in ‘Kung Food’ are, to be honest, straightforward; but they are not very exciting. You can jump, attack, duck while kicking, and... attack while jumping. That’s pretty much it. There’s no “weapon use” or special moves like ‘Ninja Gaiden’ and ‘Double Dragon’, and no real advanced platforming skills needed like ‘Batman Returns’. This is a big negative. You just stand in front of foes (or behind them) and thump them. As a result, there’s a level of tedium that just isn’t prevalent in other Lynx brawlers, partly due to a lack of variety. There are occasional body-transforming power-ups, but they don’t last long (and they even make you unable to attack certain types of foe!).

The biggest problem in this game Is that many veggie foes don’t let up their assault after they are struck. They charge forward to quickly drain your energy AS you attack. Worse, you’ll find foes are sometimes one or two pixels above your strike, making you miss them all together... and yet, they can still hit YOU! This feels unfair, especially as your energy gauge is pretty small and lives are short. There’s only so many times you can suffer death before you think, “Do I really want to tell everyone that my last video game demise was due to a karate carrot?” Add to that the timer, which gives you so little time to complete a stage that it can end your game quicker than the enemies!

The combined issues listed, arguably, make ‘Kung Food’ the weakest beat ‘em up on the Lynx. The fun “food” concept presented in ‘Kung Food’ is not really carried out with (a) enough excitement, or, (b) a clear understanding of what makes a quality brawler game. No real combos, no innovative fighting dynamics, and... surprisingly for this game... a lack of innovation. The boss fights are welcome, but by the time you reach them, you’re usually so low on energy that they become extremely difficult to overcome. Even with the energy power-ups!

Is ‘Kung Food’ a total loss? No. There’s still a game here, with some secrets and a few surprises. It does have its own unique challenge and it’s a fun game novelty game. But it’s not as engrossing as other Lynx beat ‘em ups, and the action lacked the variety and playability to make it succeed. Even character selection would have helped; those ice monsters are cool! ‘Kung Food’ is certainly playable, and it is a challenge; but this challenge is partly due to collision detection issues and the overpowered foes.

‘Kung Food’ is definitely not the worst Lynx game on the system, but as a beat ‘em up, it can’t compare with the likes of ‘Ninja Gaiden’. As you grab a sandwich and crank out the Lynx tonight, you will be glad knowing that your food will not be attacking you, as it does in this game. But if you, yourself, became a victim of toxic sludge and turn into an ‘ugly green veggie guy’, I think you’d want more attack moves than what’s provided in this game. ‘Kung Food’ is okay... but it’s hard to give this menu a stronger grade than a low pass. It just lacks the right ingredients. Pity!