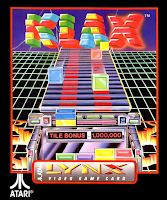 My friends, this game is considered a high point in the Atari Lynx puzzle game canon. Klaxians around the world will tell you that this WAS the Lynx's 'Tetris' (I say "was" because a few years ago the Lynx homebrew game 'T-tris' came out). Colourful tiles, patterns with colours, and spectacular sound effects are probably the factors that ol' skool players mention the most about this game. Oh, and that's it's a tough nut to crack! With the glut of new puzzling titles that have appeared on the Lynx, and in particular the homebrew scene, it's easy to forget that 'Klax' is one of the true classics of the system. After all, 'Klax' itself was an arcade conversion that came from some time ago, and sadly it isn't a game that most players talk about much today.

But maybe they should! If you've recently bought the McWill Lynx screen mod, guess what... you could experience in 'Klax' one of the most vibrant and colourful titles that the Lynx has to offer. Perhaps now after all these years we can experience this puzzling classic as it was meant to be played, with graphics now matching the stellar audio that the game is known for. Still, no game is without its faults, so I hope to give you as good a review representation as I can regarding this rather special little game, both looking at its pluses as well as its minuses.

The goal of 'Klax' is to get, well, "klaxes", which is when you load tiles into your special tile-loading machine and drop three of the same colour in a row... upon the puzzle platform. You can make a row of three tiles horizontally. Or, you can make a row vertically if you like. You can even make a row diagonally, which scores you even more points. Once you've made the pattern, the tiles vanish off your platform. If you let them stack too high or let too many drop down off the screen, it's game over! The shape you need to make in order to progress is on a silhouette screen at the centre of the action, and the tiles start to descend slowly down a conveyer belt to reach you. If this all sounds a bit complicated, just remember it's a game that's a bit like 'Tetris'; and if you like, take a look at the action on the screenshots and video in this review. See? Much better!

The good news first up is that this game looks great. Visually, it's a bright attack on the eyes as soon as you switch the game on, from the funky looking title screen to the in-game action itself. Tiles are animated very well, and there's a real feeling of cleanness in the graphics. It's not "blow you away" impressive, as other Lynx games are, but the graphics are nice and very functional. Oh, and I didn't mention... you have to hold your Lynx SIDEWAYS to play this game! Yes, this is one of those rare Lynx titles where you play the game vertically. Thankfully, this does give you a nice full view of the long tile conveyor belt, and the fact that the buttons do the same thing as each other means you can relax from having to do anything complex while holding the Lynx this way.

And sound? Wow. Just wow. Some would say this game takes the crown for the very best title soundtrack of all... I mean, seriously. If you haven't heard it, and you don't have the game, check it out online; yes, that's a Lynx backing track. Mad stuff. Sadly, there is no in-game music, which I find a bit disappointing, given the brilliance of the intro song. Still, this does help you to concentrate on the game, and to hear some of the best sound effects on offer on the Lynx. Spoken instructions, humorous yells, claps, tile-stacking noises, impressive whirs... this game has got the lot. If there was an in-game soundtrack, the audio rating of this game would deserve a 10. Without that, I'm still giving it a 9.5... it's just mind-blowing stuff and pure quality.

Control-wise, it's simple to only use the d-pad and a button; but I must say, I felt a little annoyed by having to turn the Lynx side-on. I know some people don't have a problem with it, but in the day of automatically adjusting screens (with phones and tablets) holding a larger gaming machine side-on just feels awkward. Lynx versions of 'Gauntlet III' and 'Raiden' get around this issue by letting you enjoy their action either holding the Lynx vertically or horizontally. Here, you really don't get a choice. And the other issue I must mention is that stacking tiles can get very confusing, because once you drop two of them consecutively, they appear on the platform in the opposite order that they were stacked. That really threw me at first and it took a long time for me to get used to it. The strangeness of how you must hold the Lynx, and this stacking issue, are the only real issues in this game for me.

However, here's the thing; even for those quibbles, this is a really solid puzzle title overall, and well worth the acclamation. The action is really taxing and certainly challenging, and your skills will get tested and sharpened over time. You can adjust the difficulty, choose your level, and determine how you want to achieve your klaxes. Freedom and fun sit side by side in this game, and you don't ever really feel let down or disappointed when you lose a game. It's just a lot of fun. After a while playing, you won't even notice the strange position your Lynx is in. You'll be having too much fun klaxing!

Overall, 'Klax' is the perfect "time-out" puzzle game to play on the Lynx. It doesn't require long, deep playing sessions like 'Chip's Challenge', or the rapid fire shooting action of 'Crystal Mines II'. It's a title that just requires a steady, concentrating mind that can question "What would happen if I place this tile there?". It's terrific for both playing yourself or even watching someone else, to see if they can get to the same "klax wave" that you did. Even with the unusual control method and lack of in-game music, this is a puzzler that no Lynx puzzle fan should be without. It's a classic for a reason, and even though it's on the older side, there's no better time to find out what the fuss has been about than right now. Seen the game? Grab it! And get klaxing!