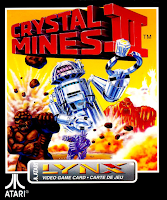 Why does the Lynx have so many puzzle games, I wonder? Well, just as well it does, because we’ve received some really terrific ones. And that includes this one! Discerning players of older consoles may remember that ‘Crystal Mines’ was a game on the Nintendo NES system. It was a game about a robot that mined underground, controlled by the player. The good news is that the sequel was ported to the Lynx, where it was aptly named ‘Crystal Mines II’. And yep, that robot is still mining!

If you combined ‘Bomberman’, ‘Chips Challenge’, ‘Minecraft’, ‘Gauntlet’ and ‘Pac-man’, you’d probably get ‘Crystal Mines II’. A top-down puzzler, ‘Crystal Mines II’ pits your robot against over 100 puzzling caverns, where you need to collect the designated amount of crystals before journeying on through the level teleporter. The game is not just about exploration either; these crystals are guarded by monsters, obscured by traps and hidden behind the walls of complicated machinery. Interestingly, this game has struck such a chord with players that a Lynx homebrew sequel of sorts was developed and released recently (‘Crystal Mines II: Buried Treasure’). And a new ‘Crystal Mines’ Nintendo DS title was released just recently as well. The following review, however, covers the original Lynx adventure of ‘Crystal Mines II’, which makes up one of the official releases for the system.

Let’s start with LOOKS. ‘Crystal Mines II’ is a nice looking little game. It’s not super flashy, but what there is before you is bright and cheery (if a little samey sometimes). The robot itself that you control is cute, but it’s not harmless; it shoots a mean raygun! You’ll need this to bust through the dirt, rocks and monsters that are before you in order to succeed. Creatures in the caverns are cartoony in appearance, but they vary in nastiness. You’ll need your wits about you to fight through them. Whilst ‘Crystal Mines II’ looks similar to ‘Chips Challenge’ in many ways, the inclusion of a weapon is one of the biggest differences between the two games.

Surrounding the different caves you traverse are various boulders, sand piles, pieces of machinery and special items (including bags of precious minerals). Picking this last variety of item up will contribute to your score for each level, which will be added to the final crystal count. Because the main objective is ultimately to collect crystals, some items in a stage are simply periphery and just there to tease you into trying to grab them or use them. Other times, you must manipulate the environment or items around you to complete the level. This injects plenty of variety into the game, and it’s why the level contents often look so different.

Sound-wise, I have to say, I didn’t enjoy the in-level music as much as I would have liked. It just sounds a bit tinny to me, and most of the tracks have this metallic edge. There aren’t a huge variety of in-game tracks either, which means you’ll be hearing the same ones quite a bit. I would have appreciated a more understated soundtrack, like those tunes heard in ‘Xenophobe’ or ‘Rampage’. That said, the tracks certainly give the game a kind of robotic, digitised charm. And that counts for something! The sound effects are excellent, combining explosions, laser beam shots, rock bursts and other beeps and whistles.

The controls in this game, on the other hand, are very straightforward. It’s simply a case of walking and shooting! The main challenge, however, is the use of the items around you. Dangerous boxes of TNT with fuses can be secured and used on monsters or scenery, having an explosive radius not unlike the regular bomb in ‘Bomberman’ (non-Lynx title). Pipes can also carry important items. Some objects can be pushed, but gravity might send them downwards to crush the precious crystals; watch out! Even more complex items will be found as you progress, leading to taxing puzzles and contraptions to get through. Plus, look for traps! For example, stepping on the hidden skull buttons will make your robot stay still for five seconds. Doesn’t sound too deadly until you consider that the monsters around you will be quite happy about this situation! Even though you have infinite lives and tries in each level, the challenge is always to make it to the exit portal, and this is a very tricky task to accomplish.

The great thing about ‘Crystal Mines II’ is the mission variety. Whilst it would be great if the levels differed a bit more in appearance, the tasks and missions themselves are extremely diverse over the 100+ stages. You’ll be digging, shooting, solving puzzles, collecting crystals and setting off bombs. And one really amazing thing is that there are an enormous amount of secret levels. You could get through the game without finding a lot of them, but if you look carefully, you’ll find yourself in unique stages full of treasure. ‘Crystal Mines II’ also has an impressive password system for every level, so your progress through the game is essentially saved along the way. But trust me: once you get to the later levels, you’ll be really challenged. The puzzles are so tricky that you may find yourself taking a break from the game for a while just to figure out what to do in your own mind. In this way the game is a lot like ‘Chips Challenge’, and those who have journeyed with Chip will have an easy time adjusting to this game (and vice versa).

All up, this is a tricky, varied puzzler that requires a lot of thinking and repeated attempts at levels before you advance very far. It’s tough as nails, but cutesy in appearance; the ‘Scrapyard Dog’ of puzzlers, perhaps. It's easy enough for beginners to pick up, but hard enough for experts to get stumped later on. You’ll be challenged all the way through and have a lot of fun, though I must say I did enjoy ‘Chips Challenge’ slightly better for its simplicity. No matter - ‘Crystal Mines’ will give you a long-lasting gaming experience which is great for the whole age range of the Atari Lynx community.

Now, where are those crystals?