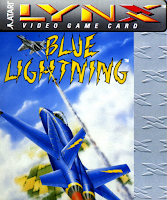 The Lynx had a couple of 'showcase' titles: 'Electrocop', 'California Games'...but there was one game that took everyone by surprise when it was released. That game was 'Blue Lightning', a title that put you in the cockpit of a stunning blue fighter jet, shooting down targets and completing military missions. An eye-catching story or some kind of broad narrative is not so important here; this game is about a series of dogfighting tasks, carried out by air, over a treacherous military terrain.

No one was prepared for how good this game looked back in the day (even without the stunning McWill Lynx screen mod). 'Blue Lightning' literally floored the crowds with some incredible graphics, scaling, blast effects and impressive cut scenes. Some would argue its even better looking than the later Atari Jaguar version. When you realise that this game was one of the earliest titles for the system, you begin to wonder just what would have happened if the Lynx had more marketing clout around it. Sadly, it's only now that there is widespread realisation of how classic 'Blue Lightning' really is, and why it deserves to be known as one of the greatest Lynx titles of all time.

Your plane looks magnificent, fires guns and shoots 'lock-on' missiles which whizz around in a pall of white smoke. Underneath, the detailed ground scales toward you, and is filled with hazardous objects and enemy armies. Or, if you like, you can drift up and take to the skies, floating through fluffy clouds and avoiding enemy fighters. This game was like Super Nintendo's 'Star Fox' BEFORE there was 'Star Fox'! It's truly a sight to behold.

Don't expect a huge amount of music in 'Blue Lightning', but some nice sound effects punctuate the game. Many explosions will fill the speakers, and you will create plenty of those noises yourself, whether you are firing your artillery or launching bombs. The thought occurs that this game could have done with some music, like 'Star Fox' did'. And some cockpit speech! It just would have added to the feel of the game. But at least you won't be distracted from the action. And hey, the title screen music is nice, if you can tear your eyeballs away from the rad visuals.

Controls are easy to learn, and the jet handles surprisingly well. Firing your weapons is straightforward, and the collision detection is good. Even when you traverse dangerous desert ravines, the craft feels easy enough to manoeuvre. Though you are always going forward, the game doesn't necessarily feel like you are completely 'on rails': you can swoop low to the ground or take to the skies. But the game does reward you for being strategic, because you need to complete certain tasks in order to finish a level properly. This might mean taking out ground targets or high up enemy craft. So while it may look pretty to look around, you'll need your wits about you to complete the levels properly.

So, is this a game that has negatives? Of course, all games do. It's not going to appeal to everyone, for sure. If you don't like flight games, you might not be convinced by 'Blue Lightning'; even though it looks stunning. But it's certainly more accessible than, say, 'Warbirds', if you are looking to try a flying fighting game. And for fans of this kind of game, you'll be thrilled to find that the missions are all different and have a variety of objectives. Although the game missions can sometimes be samey in feel, they are all a challenge to play, and so the game itself has plenty of replay value. Longevity-wise, there are plenty of missions to take on, and there is even a password system to allow you to carry on where you left off.

All up, if you are a fan of games with fighter jets and high-flying military action, you are going to love this game. And for anyone else, it's really worth giving this game a try. It's highly accessible, has plenty of action, and has the gameplay to back up the awesome visuals. Time to take to the skies...'Blue Lightning' calls!